Taking a Name in Vain

Contrary to common usage, "Thou Shalt Not Take the Lord's Name in Vain" does not necessarily refer to expletives. In sum--the arguments can get rather complex--it refers to promising something in God's name and not following through.

A person who drops the Son of God's name into daily conversation as a kind of placeholder rarely means it as an oath. In all truth, I don't find it offensive although I do find it kind of tacky.

Like most commandments, it is aimed more at believers than non-believers (or even indifferent believers), those who are engaged in the act of belief.

Like with many things, there is a line between absolute faith/perfection and the everyday, normal vagaries and weirdnesses of human existence.

That is, some believers will argue against any usage--rather as I am doing here, to a limited extent, when I refer to Jesus Christ--while others will point out that calling oneself Christian or belonging to a church that carries the name of Christ is not automatically blasphemous, even if such Christians most of the time behave imperfectly.

Since I believe in a merciful God with a sense of humor, I tend to side with the latter argument.

The terms--"receiving" and "using"--come from Experiment in Criticism by C.S. Lewis, in which he argues that a good reader will "receive" a text: allow the text to speak, try to understand the text and the author, be swept up by the text, come away enlarged, even fulfilled. "Using," he argues, is when a text becomes a source for some other agenda, whether personal or political.

Lewis is speaking specifically of fiction, and he allows that his theory is an "experiment."

Nevertheless, I find his definitions reflective of my personal feelings on a number of subjects. That is, I'm not arguing from C.S. Lewis backwards. Rather, I find his terms mirror how I feel about things, like, say, Christianity.

Both Jesus Christ and Paul argue in the New Testament that the ultimate gift of God--namely, his Son--is there to be received after which individuals will (hopefully) feel a true desire to demonstrate thankfulness for that gift through emulation, kindliness, and a desire to love God in return for His love.

Jesus Christ, then Paul, speak strongly against "using"--that is, they speak against a state of affairs where God or Christ Himself become labels, forms of arguments, ways of getting people into a particular set or group or clique in order to become winners (as defined by that set or group or clique).

That is, Jesus Christ, then Paul, draw the line at political uses.

I will acknowledge that this can be a difficult line to parse. Obvious in some cases--less obvious in others. Where does "use" to pay homage or to educate or to promote allegiance to something bigger (bigger ideas, bigger hopes and dreams) edge over into "use" that becomes its own end: allegiance to the group, the image, the words (pronouns, anyone)? When does "use" become a form of identification, not only by outsiders but by insiders? When does it turn into a way to "distinguish" the winners? 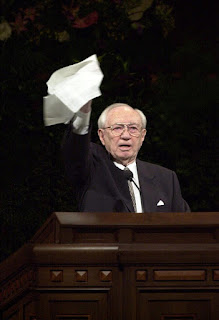 The Son of God used in marketing (and please take into consideration that I am a proponent of the free market system) is nevertheless, less appropriate, no matter how well-meant the marketing.

About a year ago, my church included the name of the Son of God in its URL. I'm not listing the name of my church here because, frankly, a lot of churches do this. (And most of you know anyway.)

I still cannot type the URL and I likely never will. I don't even Bookmark it. I use keywords to find the church website through Google when I need to.

I cannot speak for anyone else and would never try. The truth is, my lines in regards to various other religious issues are probably far more flexible than those of members who would disagree with me on this issue--nobody ever agrees about everything. However, the line here, for me, is fairly clear. And recent decisions are not making things easier for me in this regard.

This particular sub-blog of mine is monitored. I will not be allowing through any comment that attacks anyone for any reason, even a post that attacks by agreeing with me. Spiritual exegesis, anthropological insights, and general ponderings will likely be allowed.